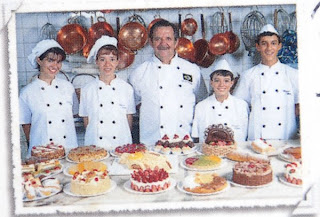 Raquel, (seen far left in this family portrait from some years ago) helps run the family business started by her grandfather Benjamin in the 1940s. He would bake bread, then sell it door-to-door. Then he got a stall, then a padaria (eat-in bakery) called Barcelona, the first of three they now own and run.

20 years ago, he and his wife designed and built Benjamin Abrahão’s o mundo de Pão (world of bread), in the heart of Higienópolis, which now employs 60 people on various shifts over 24hrs.

Benjamin died recently, leaving the family to preside over the production and sale of fine breads, pastries, cakes, chocolates, juices, etc. They’ve diversified, adding a new padaria in the Jardims, three outlets at three of the city’s Universities, and a catering service for parties and events.

Our friend Marcia explained that life in the city would be impossible without neighbourhood padarias. She singled out Abrahão’s as the padaria, an example that others aspire too, with its iconic reputation built on quality and innovation. When padarias were starting off, all they offered was Pão Frances (French bread rolls), a breakfast staple sold by the kilo. Abrahão offered different types of bread and it was good, meaning lots of satisfied, returning customers.

Raquel says her grandfather travelled the world to learn the recipes and teach. Though she, her sister, mother and aunt, who all work in the business do not bake. He thought women would gossip in the kitchen and not work. His two grandsons, who were taught the trade, continue to introduce new ranges and one now works on a TV cookery programme.

One morning at Higienópolis, we timed photo shoots for the different customer communities; the maids at 6.30, the businessmen at 7.30, then the students and those with time to use the valet parking and a leisurely morning coffee.