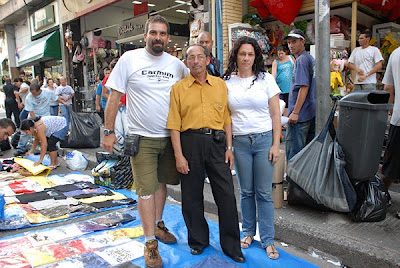 Pictured here (left to right) are Dener, his father-in-law and wife Simone. They’ve been selling replica designer t-shirts, retail and wholesale, from this regular pitch for 5 years. They are amongst the thousands of ‘camelôs’ (informal traders) working around Rua 25 de março; an extraordinary daily commercial battleground where thousands of Paulistas and visitors to São Paulo come for a bargain.

The father-in-law is not looking at the camera because he’s heard the call ‘o rapa’ and seen the oncoming Metropolitan Police. Background left, fellow traders who’ve also heard the call, begin to scoop up their stock into large bags. Seconds later, Dener quickly gathers all their stuff into their big denim bag (on the right), slings it over his shoulder and walks off.

This situation plays itself out every 10-15 minutes. The “o rapa” is called by the Camelôs to warn their fellow traders of the threat posed by police patrolling the street. A pair or a group of police take a slow walk down the street, prompting every Camelôs and their stock to disappear from view. A few minutes later, when the Police themselves have disappeared, traders return to their pitch. As our friend Tulio describes it, its like Moses parting the sea. Except, the police are not quite so benevolent. If the Camelôs are not quick enough, they risk their stock and equipment being confiscated (and appropriated by various government departments we are told), and ultimately, arrest.

Trading on the street begins about 3-4am, 6 days a week. We learnt from a man selling belts that Camelôs can sell in relative peace from 6-8am, without police interruption. Otherwise, the city’s policy is to use a consistent show of force to control and, it seems, eventually eradicate informal trade on this street. Everyday ends with a big ‘o rapa’ at around 4pm, when a flood of police and city trading officials prompts a mass exodus. The ‘big one’ started at the moment we where taking this photograph, so we were not able to get a picture with everyone’s full attention.

Dener and his family love what they do. He says they love the excitement, the community, the people, and the trade. They respect that the police have a job to do; even though they’ve had their stuff confiscated more times than they can remember. But they make a good living, R$100 profit most days. Earning more than when he was a civil servant in a youth prison, or when he worked on the armoured van cash deliveries/collections.

With their help we arranged some short, in-situ performances and photo/video shoots with their customers, and those of fellow traders up and down the street.

Not everyone seemed as comfortable with the police pressure, especially those who had lived in São Paulo for only a few weeks. Their eyes nervously flicking up and down the street to best see when the O’rappa is coming; a little like Simone’s father.