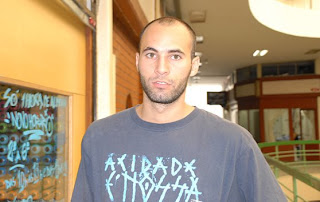 Diego runs a specialist paint shop for graffiti writers. Graffiti is an established form in the city, with a number of specialised galleries, and sanctioned or illegal projects on view. Diego even has a competitor! He gets around 50 customers a week, and sells a full spectrum of colours and different gauged nozzles for different spray patterns, narrow for tight line work, wider for fill. One customer involved in our photo shoot wore a nozzle on a lace around his neck.

The paint is imported from Spain. They pay an import tax and that makes the cost of a can quite expensive (R$13/£3.50). Sometimes Diego is asked to pay a bribe. He refuses and occasionally his products are impounded. When this happens, Diego absorbs the cost and doesn’t pass it onto his customers. His competitor sells cheaper German paint but charges much more for the nozzles.

At present, the shop is situated on the 4th floor of rundown Galeria Presidenta; one of many splendid Galerias in downtown Sao Paulo. Soon the shop will move to a more upmarket area, the Jardims. On the one hand, Diego thinks it will be good for his customers from the streets, favellas and periphery to have the experience of going to and feeling at home in the Jardims. On the other, he reckons what he calls ‘Playboy Writers’, who currently feel too intimidated to go to 24 de Maio, will buy more if he’s in the Jardims. There’ll also be social space for activities and some kind of display/exchange of ideas.