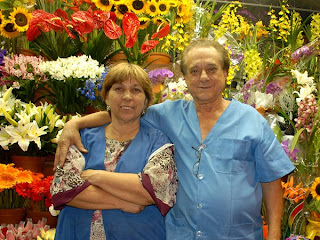 With over 22 Box stalls, the Mercado Das Flores stretches for some 300 metres outside the Cemeterio do Araca, in the Clinicas district of the city. Being on a busy roadside, it also provides an aromatic treat for a passenger or driver with their window open.

This is Sueli and Marco Aurelio. She’s been working there for 20 years and he for 40. Like a number of stall holders, they are open 24 hours a day, sell both cut and potted flowers and buy stock from the large Ceasa flower market on the outskirts of the city. However, they are the only sellers who do business over the internet. Early mornings they snatch some sleep on a small mattress under the display.

We spent Friday evenings with them and the other sellers, asking customers for the story behind their purchase. For Sueli and Marco, business is not as busy as it used to be, as flowers are now more expensive. They have different customers at different times of the week. Most people pull up their car and buy flowers for special occasions, house decoration, or if it is late in the evening/early morning, for a party or apology flowers for their loved ones. Now, we were told, hardly anyone visits their family graves in the cemetery behind the stalls. Young people don’t do it. We did watch an older woman buy some yellow chrysanthemums; apparently, along with white chrysanths, the flowers of choice for graves.

Rose at Box 22 revealed that a few families do buy flowers for graves every Sunday morning, and have done for years. Also, if it is Mothers’ Day, a birthday, Dia dos Finados (the Day of the Dead) then they will come on that day too. So that week, they’d come twice. But mostly, it’s passing traffic, buying for gifts and celebrations.