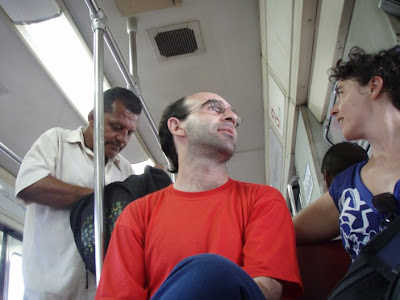 Informal train vendors find themselves in a complicated situation at the moment. These are poor people who need to sell, but to do so they have to meet the challenge of the black-clothed security guards, which people call the “urubus” (an urubu is a kind of vulture).

The vendors appear on the trains, between stations, selling water, snacks, sweets, pens and other items small enough to carry en masse, and that passengers will want buy. The guards watch over every platform of every station and ride the trains, trying to inhibit the vendor’s work. This everyday cat and mouse behaviour has gone on for some years, but now the train company (CPTM) are in the middle of a crackdown, allied to the cleansing and modernisation of their service, which seems to include getting rid of the vendors. Occasionally, armed police search suspected vendors (anyone who looks relatively poor and is carrying a bag) at the city’s main station interchanges, and there is talk of undercover officers on the trains.

Their situation makes them hard to track down and work with in any depth. When we did, with help from our friend Felipe (pictured in the red T-shirt), it was difficult to gain their trust in the time they had between stops (suspecting we were undercover police). One seller we managed to speak to was Robinson, who had been working the train for three years to support his family. He works 6-7 hours a day, 6 days a week and buys stock from Bras market. That day, he was selling 10 pieces of bubblegum for R$1, despite having most of his stock taken by the police earlier on. Robinson calls himself and other train vendors ‘Marreteiros’.

We also shot some video of others at work (with their permission) and caught a few snapshots.