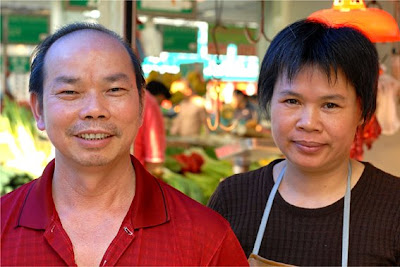 Lin Ye Te and Su Gu Zhen are pork butchers in Shipai, an ‘urban’ village swallowed up by Guangzhou’s expansion 20 years ago. Many residents are transient, low-income workers from other parts of China who rent apartments from original villagers who now live in nicer parts of the city. At Y550 (£40) per month for a small one-bedroom flat, rents are not cheap.

We’d heard talk about how the price of pork is a big issue for people, especially for those on low incomes like in Shipai. We were told that pork is an important staple resource with pricing under daily government control. Leaving the price open to the market could lead to sharp inflation and make pork more expensive in remote parts of China, where people are often on low incomes. Despite this regulation, the price has rocketed, doubling in the last year, in part due to an outbreak of disease and a subsequent cull, and rising oil prices upping transportation costs. The prices are not as high today as they have been, but are still higher than before the disease struck.

The butchers helped us start a process documenting people up and down the pork supply chain, and ask about the impact the price rise has had on their daily lives. They themselves work most hours of the day and are paying to put their son through University. They introduced us to their customers and suppliers.

Lin Ye Te took us on his nightly visit to ‘The New Pigs Wholesale Market’ on the edge of the city. He bought two live pigs at Y10 per half kilo from a wholesaler who brought the pigs down from Hunan province; one weighing 135, the other 115 kilos; before going home for a few hours sleep. A private food company collects the pigs, delivers them to a government abattoir where they are killed, health tested, cut it in half and stamped (or not) as fit for human consumption. The butcher pays Y80 per pig for this service. The private food company then delivers the pig halves by van to the village gates.

The butchers employ a man with a motorbike to collect the pig carcasses from the gates and transport it through the narrow walkways of the village to their stall in the central market. Lin Ye Te cuts up the carcass into different parts of the animal and throws the meat onto the stall. Su Gu Zhen and their employees cut the meat further into smaller portions and cuts, to sell to customers. General pork cuts are sold for Y14 for half a kilo. Choice cuts, like the heart, are sold for Y28 per half kilo. From wholesale to cooking pot takes less than 8 hours.