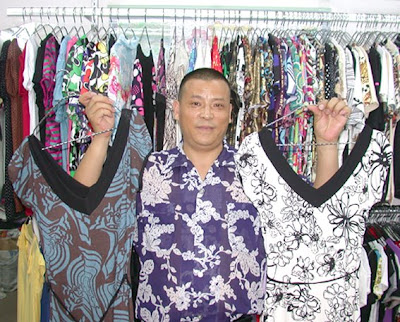 Here is Wang Lin, general manager of Anna V (Anna Victoria) clothing, in his central Guangzhou office, showing off his pick of this seasons collection made in his factory outside of the city. His office is on the 6th floor of a huge building hosting hundreds clothing wholesalers, attracting buyers from all over China and the world.

It’s a family business, set up by his relatives in Taiwan. We met his wife, who was asleep at her desk when we walked in. His children help out at the factory when they are not in school. He made us tea, and we sat and chatted about his business; how it isn’t as good as it was and his strong sense of business ethics.

Anna V is their own Womenswear brand, with a new collection for each season – four times a year. They don’t have a designer; they just work things out for themselves. They don’t do fakes/rip-offs and they do pay taxes. His business operates almost entirely with returning, loyal customers. Sometimes his good customers, such as one Japanese man, drop in for tea three times a week when they are in town. Other clients come from Italy, USA, Iran, Iraq and Spain to name a few. The company also has a website and accepts orders direct to the factory through that.

They used to have a retail unit downstairs, but that became too expensive so now they only operate from this upstairs office. Wang Lin used to be able to manufacture and sell 1,000 units of each design in his seasonal collections, but now he says he can only sell 200 of each. He says he doesn’t make much money, as he has to pay his workers first. He employs 200 people at his factory.

He believes in doing business honestly and taking a long-term view. Trust, friendship and responsibility are the backbone of a business he wants to run like a family, and his family are happy. Rather than the short-term manufacture of fakes, which he believes is a non-sustainable business, he wants to build something lasting, to pass on to his children.