Posted 7 December 2008 in Community service Homogenisation Informal trading Political systems Romania - Iasi Small-scale possibilities
Stop and think of a shop you care about? In some research conducted in different neighbourhoods, we invited passers-by to consider this question. Over four days, on the streets of Alexandru, Copou, Pacurai and Tataraşi, we asked people to tell us about a shop that they care about, and talk about the reasons why they felt a ‘bond’. Bonds, we thought, are often made in particular circumstances – a shop may have helped them through hard times, or fits conveniently into their daily routine, or represents something culturally significant they feel needs supporting in the city’s changing economic environment.
Through this research, we wanted to better understand how locals felt about the city’s evolving shopping landscape, and potentially find a lead to a shop (or context) that we could develop a project with.

“I care for Carrefour/Kaufland/Billa …”, was (un)surprisingly, a popular initial response.
Supermarkets are a recent phenomenon in Iaşi, which perhaps offers some explanation for people’s enthusiasm. Billa was the first to arrive 5 years ago, followed by three Kaufland stores, one G-Market, and two Carrefour’s – including the new development pictured here in Pacauri, on the periphery of the city. Below the surface of this initial response we heard talk suggesting a deeper truth. Our friend Alexandru told us that even if it has been some time since 1989 revolution, people are still affected by it. He said there is a kind of euphoria when you have a choice. “In communist times there was just one type of yoghurt, one type of bread, one type of butter. But now we can choose whatever we like. Consuming things is a calming activity for people. We like it.”

People really value the idea of consumerism, and the power of consumerism is all too evident from the myriad of choice on the supermarket shelves. “You can find everything… now we have access to all kinds of products”, echoed Constantin. For some, just having access is enough: “I even enjoy going to Carrefour, even when I don’t buy things”, a woman in Tataraşi told us.

We met a construction engineer called Carmen who lives in the quiet suburb of Copou. She doesn’t necessarily agree with the shopping culture promoted by the supermarkets. Despite using them from time-to-time when pushed for time, she thinks places like Carrefour and Kaufland, “sell people products they don’t need”. 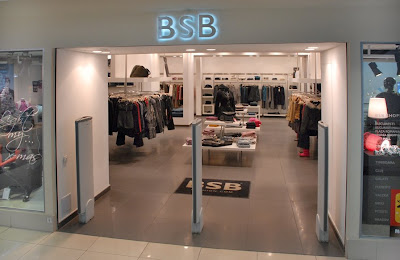 When she does have the time though, one place she really loves to go is the clothes shop, BSB. It’s on the second floor of the recently-renovated Moldova Mall, a former socialist Supermagazin in the city centre. “They have the type of clothes I prefer – modern, with my favourite colours.” She visits maybe once a month, not to buy, but to browse and rummage for inspiration. “I don’t have a lot of money so I make my own clothes. I go to see the trends.” 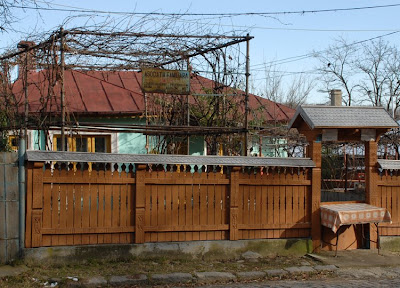 Lucica Popovici also lives in Copou. She prefers to get her milk, eggs, cheese and wine from the Moirei family house – pictured above. She’s been buying from her neighbours for 20 years. “I have my people,” she told us. “They keep cows and chickens at the back of their house, so everything is fresh compared to buying them in a store. I can also buy on credit”. The table in the gateway at the front of the house functions as the counter. We’re told this kind of domestic economy is limited to the minority garden suburbs, with around 80% of Iaşian’s living in urban apartment blocks. It established itself as a way of supplementing food tokens and cash in communist times, and as such remains popular with older generations, but less so with younger. Lucica says she’s also part of an informal network where people from nearby villages come and sell their produce door-to-door, and is a big fan of Alexandru Market. 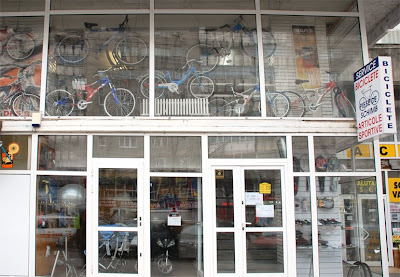 Lucian is a university graduate whose life wouldn’t be the same without the bike shop near the train station. He goes there to buy equipment and get his bike serviced and repaired by their mechanic, who he now counts as a friend. Like him, the staff are fanatics, and they organise cycling tours through Iaşi’s hills. 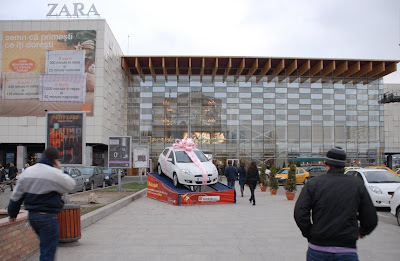 “Julius Mall is something beautiful. It’s more beautiful than other shops”, we were told by Ionut, a little later in the day. He likes Versace (on the 1st floor), but Armani is his favourite. “When I come back from work abroad that’s where I go… It doesn’t matter that the prices are high, the quality is the best!”
Two people spoke of their own shops. Eugen set up his secondhand clothes shop in the Galata neighbourhood 6 months ago, and he cares about it because it is ‘for his children’. Elena has run a kiosk for 15 years on the Alexandru Esplanada. She buys good quality produce from Cash & Carrys – Selgros, Metro, Siraj – and from supermarkets, which is then bought by local people, including those who are old or infirm and unable to travel to the supermarkets. In that sense she cares about the suppliers, but also cares about all those she serves.