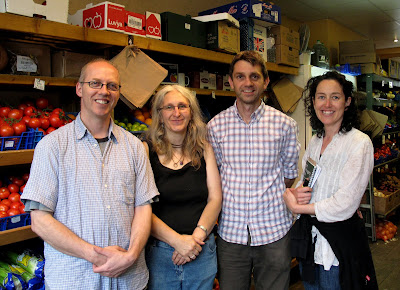 Beanies is a co-op selling fresh fruit, veg and wholefoods from its current location on Crooks Valley Road.

The Co-op – Since 1986, they’ve built up a business that now supports 19 full- and part-time co-op members. Matt is the longest-running member, who joined in 1992, Jan joined a few months later. There’s a flat management structure where all the current 13 directors have an equal say.

Customers – From local households buying groceries for a week, to students buying two mushrooms, a carrot and an onion every day. Loyal customers travel from as far as Chesterfield, wanting to follow the ethics of natural wholefoods. They trust Beanies to have explored the food’s provenance, so they can buy what they want, without having to read every label.

Deliveries – They operate a box scheme, delivering organic fruit and veg across Sheffield. They’ll meet the most exacting of requests, such as including a pack of ground cumin (if a shopping list requests half a teaspoon of ground cumin!)

Suppliers – The co-op has built up strong roots with local growers, such as the kitchen gardens at Worley Hall. It’s even been known for Matt, who is a good gardener, to visit a grower and advise on how and what to grow and when to pick it. Beanies know what they can sell and advise what they would buy from a grower. They are soon to start selling bread made in their own bakery.

Economics – They are not sure yet about the affects of the economic crisis, because it’s always slower in summer, students aren’t around and families are on holiday. But they probably won’t be voting themselves a wage raise until they know what is going to happen. The post office, two doors up, recently closed and this has impacted how many people pop in.

Any fresh produce that’s past its best is sold off at a cheaper price. If still unsold, it becomes staff food. Then it might be given to people who come in to ask for food for their guinea pigs, iguanas, rabbits etc, then finally it goes onto a compost heap at a local farm.

Local community – Some locals have greater needs than others and those working at the shop do what they can. People might ask to use the phone because their electricity has been cut off, or for 20p for something, or sometimes borrow money from members of staff. It’s even been known for the shop to provide safe haven for someone at risk, or offer their van if transport is needed. These kindnesses can work both ways. For example, if a local saw a break-in at the shop, they might be more likely to call the police.

Beanies will try and help the community’s more vulnerable people where they can. They take shopping to people’s cars or carry it home for them if they can’t manage. One elderly woman would walk to Beanies but didn’t like the walk back to her empty house, for fear she wouldn’t make it. So, each time, a member of the co-op would escort her home. Another woman couldn’t get to the shop any more, so Jan would pop in with a delivery each day during her lunch break. Tea and biscuits developed into a long-term friendship.

Politics – Recently, a Green Party Councillor came into the shop and Jan complained ‘our vigil in the peace garden was broken up and we were moved on’. The councillor was supportive and said ‘email me and I’ll do something’. Jan says the shop represents the tip of the environmental iceberg and that she often notices the ‘green’ community connections taking place in the queue.