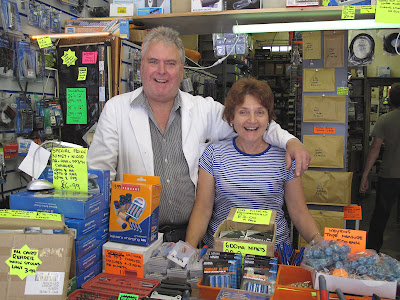 Reg has sold electronic components at Bardwell’s for 40 years. He works with his wife Jenny [right], who, along with her brother Rod, inherited the business from their father, who set up the business in 1944. Rod’s son Chris also works at the shop. Despite saying he hates electronics and customers refusing to believe he doesn’t know how to build or fix something, Reg is an engineer by trade, knows his components and will try his best to satisfy hopeful, or technically adept customers.

A first-time customer looking for a replacement 60 milliamp fuse from his stereo’s tuner, had heard of Bardwell’s reputation for stocking all things electronic. He’d been told by a high street electronics retailer that if anyone’s going to have that fuse, it’s Bardwell’s. Reg tested the fuse, confirmed it was “deceased”, and said anything under a 100 is not made anymore. So rare in fact, the shop’s 60mA drawer was empty. They had some 80s, but Reg advised it wouldn’t be safe enough and suggested a 50 would do the job. Because the 50s are rare too, why not buy two? Total price 50p.

Reg says the shop could be busy with one customer after another, but in an hour they might only take a tenner, as some items cost as low as 25p. It’s tough to earn a living from the shop nowadays – they’ve not had a pay rise in ten years – because people don’t buy electronic components like they used to. Reg offers up two cultural shifts as root causes. Electronics isn’t taught in schools like it used to be and cheap Chinese imports are flooding UK shops. They used to get loads of school kids coming in, buying stuff for projects they would build, but now it’s cheaper to buy new rather than fix things.

Bardwell’s has survived because they’ve diversified their stock to include TV and Computer accessories. They also sell online (Bardwells are ebay Power Sellers) and they also take orders through their website (www.bardwells.co.uk).