The rabbit still had a face 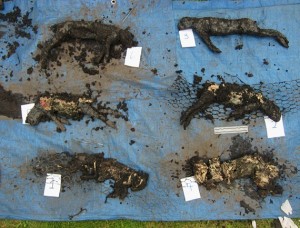 The moment Dr Carolyn Rando saw the rabbit still had a face, she gave a gasp of delight. It’s a Sunday and we are spending a few hours in the suburban back garden of Charlotte’s parents’ house. Charlotte is one of Carolyn’s research students and her impressively-executed experiment is proving a success. She is testing the difference made to the decomposition process, when wrapping a corpse in gaffer tape. The idea was prompted by a human case in which the victim’s head and hands were bound (and preserved) by the tape. In place of human bodies, we’re exhuming and analysing the six rabbits that Charlotte buried in the garden two months ago. All the rabbits had been shaved, two had been completely wrapped in black gaffer, two had just their head and legs wrapped, and two (controls) were not wrapped. Each was buried in its own pit, cradled by chicken wire, about 18 inches below the surface.

Charlotte’s parents speak enthusiastically about the (morbid) fascination they and their friends have had about their daughter’s experiment and what’s become know as the “death patch”. Charlotte’s father has kept it under keen observation, poking a thermometer into the ground to record the daily temperature.

The three things we were keen to experience today were: the smell; the look of the different stages of decomposition; and the flies.

There’s not much in the following list of gases generated in the decomposition process to evoke a visceral reaction – hydrogen sulphide, carbon dioxide, methane, cadavarine, putrescine, etc. Also, the various scientific descriptions we’ve read about their combined ‘stench’ haven’t really helped us understand what decomposing corpses smell like at various stages.

When exhuming the pits, we began to get of whiff of something fleshy and decomposing down there, intensifying as we dug deeper and got closer.

Once all six rabbits were laid out and exposed on the tarpaulin, we started to try and describe what it was we could smell, taking our face masks off to better appreciate. The fresher, fully wrapped (but now unwrapped), corpses smelled the strongest. Charlotte’s mother said it was like being on a farm, with a hint of a walk through the woods. Carolyn agreed, saying it’s a familiar yet unknowable smell with a hint of shit in it, “because shit is part of what we are digging up”. The sweet, knowable, yet alien smell permeated the air, with Charlotte’s father reporting that he could smell it from the front garden. Its intensity gave Andrew a headache, yet made Carolyn hungry! On the train back to London, the smell lingered on the soles of our shoes, and we’ve just got a sense of it again today from a stinky drain.

There were marked differences in the conditions between the six rabbits, with 3 main factors affecting the corpses: Wrapping, Partial Wrapping & Body Mass.
⎯ The different body mass of the two unwrapped rabbits altered their states. The smaller of the two was further into the advanced stages of putrefaction, closer to being completely skeletonised, with the breakdown of the tougher connective tissues.
⎯ The two partially-wrapped rabbits showed retarded decomposition in the heads and legs, still had connective tissues, but putrefaction in the bodies.
⎯ Fully-wrapped – cutting the gaffer off the rabbit that still had a face revealed it was almost perfectly preserved, with the decomposition process retarded. Amazingly, dissection showed all organs intact and there was even liquid blood in the heart. The wrapping on the other fully-wrapped rabbit was compromised, meaning the head had putrefied, whilst the body was more-or-less intact.

Charlotte’s experiment was a success – who needs embalming when you’ve got gaffer tape.

One thing that struck us was the texture and varied colours of the decomposing flesh, giving rise to some gorgeous abstract photos. We’ve heard it described as cream cheese, though brie at room temp might be closer to the truth, and the colour changes relative to the part of body. For example, given a human diet, putrified intestines and stomach would take on a brownish colour with a hint of green.

Before this day we thought we’d focus on one species of fly, and the role it plays in decomposition. However, the variety of fly species and behaviour we saw in this suburban garden in Hampshire challenges that.

There was a whole spectrum of types and colours; blowflies, horse flies, yellow flies, green and blue bottles, black flies; with dozens arriving within minutes, and going crazy for the fresher, stronger smelling corpses that Carolyn and Charlotte unwrapped. Up close as she was, Carolyn acknowledged to finding the intensity of their buzz challenging.

In terms of behavior, the ebb and flow of their presence with the slightest change in the air temperature was really surprising to witness. As the sun came out from behind the clouds, they descended on the corpses, as the sun disappeared, they also vanished. When present, they seemed to take a little time to check the corpse out, figuring out the choice spot to lay their eggs. A number focused on a small tear in a rabbit’s groin.